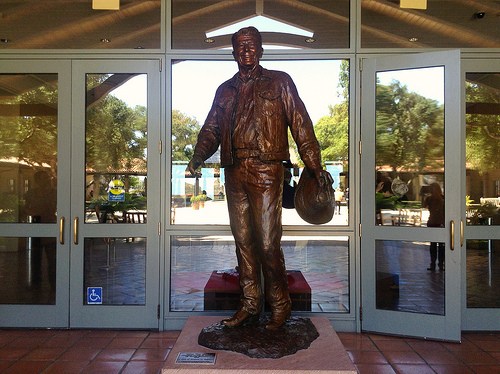 Exploring the Reagan Presidential Library and Museum was a journey through the life and Presidency of our 40th President, Ronald Wilson Reagan. Reagan served as our president from 1981 through 1989 and has previously served as Governor of California from 1967 through 1975.

This historical gem is located at 40 Presidential Drive in Simi Valley, California. It contains his papers, speeches, and significant legislative accomplishments. It’s a monument to Ronald Reagan’s presidency, and ultimately his legacy. 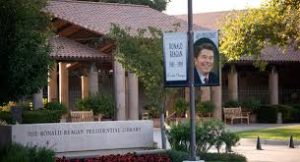 Archives and Records Administration. Dedicated 25 years ago, the Reagan Presidential Library is a political shrine and historical museum to a man whose political stature in the minds of Americans and people around the world, places him in equal company with other world Statesmen including Franklin D. Roosevelt, Winston Churchill, Margaret Thatcher, Pope John Paul II, and Nelson Mandela.

When you first approach the Library entrance, you’ll see a magnificent bronze sculpture of Ronald Reagan and a stunning painting of Nancy Davis who married Ronald Reagan in San Fernando Valley in 1954. She stood against drugs and traveled nearly 250,000 miles to fight substance abuse and is best remembered for the slogan she coined: “Just Say No.” 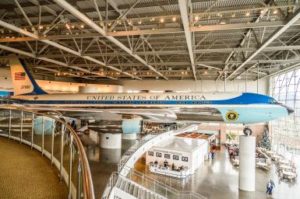 There are so many treasures inside and out. You can actually board Air Force One in which Reagan flew over 660,000 miles, to 26 foreign countries and to 46 U.S. states. Visiting this exhibit and learning how Reagan changed the face of global diplomacy was a true eye-opener.

You can also see an exact replica of the White House Oval Office. Each 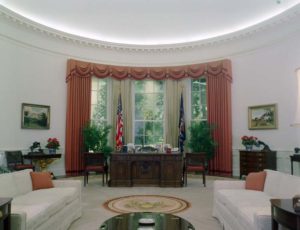 president decorates the Oval Office to suit their tastes. President Reagan, inspired by the West, added earthy colors, western art including a collection of bronze saddles, and, of course, his jar of Jelly Bellies on his desk!  Reagan’s famous Jelly Bellies were shipped to him by Robataille’s Candy located in Carpinteria, California.

As you peer into the Oval Office, known as the president’s formal workspace, and if you look closely, you’ll notice that the wooden base of the Oval Office Desk appears to have been altered.  This is because President Reagan added a 2” base to the desk to accommodate his 6’2” frame and to keep the desk drawers from hitting his knees. Two plaques on the desk convey President Reagan’s inspirational can-do spirit, can also be seen. One says: “It can be done” and the other: “There’s no limit to what a man can do or where he can go if he doesn’t mind who gets the credit.” 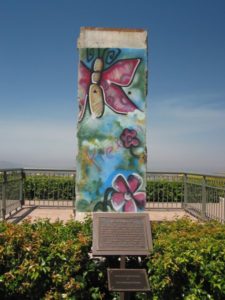 Outside is a large piece of the Berlin Wall which was a gift from the late Carl Karcher, the founder of Carl’s Jr.”

It was fascinating to learn and be reminded of the life and legacy that a summer lifeguard, sports radio spokesperson, Hollywood actor, Army officer, and then President, had on our Nation. Countless people around the world enjoy greater freedoms, more economic prosperity, and better lives as a result of Ronald Reagan’s leadership. One of his most famous acts was his famous 1982 tax cut which was credited with unleashing 72 months of uninterrupted economic growth, resulting in the creation of 18 million new jobs.

The Reagan Museum features hundreds of artifacts and dozens of interactive displays for visitors of all ages to explore. There are 18 galleries that pay tribute to President Reagan and his many accomplishments by capturing his irrepressible and patriotic spirit, his respect for individual liberty, his firm belief in global democracy and his unequivocal support of economic opportunity.

The Library is a  must see for any freedom loving American, regardless of your political affiliation.
You are taken back to that amazing time in our nation’s history when optimism reigned. This Library and Museum is a shrine to that greatness to be sure… because it especially celebrates a truly great nation by honoring a genuinely honorable and decent man who believed America was “A Shining City Upon A Hill.”

As we look around at our current political climate and the choices that we are facing, I have to wonder….

What would Reagan do?

Posted in Los Angeles, Up and Away and tagged ronald reagan library, simi valley